With these scissors stylists can perfectly materialize their skill and images in customers' hair styles. Find haircut scissors at Cosmo-Smith in Sanjo-shi, Niigata, Japan.

"A magician and genius for thinning scissors, Tatsuya Kuribayashi" travels all over the world and he is recognized by famous beauticians and hair artists who seek bona fide scissors. 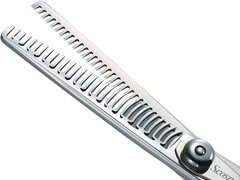 Thinning scissors made by Tatsuya Kuribayashi of Cosmo-smith are recognized by famous beauticians and hair artists who seek bona fide scissors.
He has learned skills and the theory of blade sharpening and built up his skills and sense through hearing voices of hair artists in person day after day.

Since he debuted when he was 25 years old, his scissors made by his ingenious skills have been outstanding in sharpness, ease of use and durability.
Not only the Japanese beauty industry but also those of Asia, Europe and America have applauded his products.

Tatsuya Kuribayashi's thinning scissors are for professionals who seek bona fide scissors.
They ""don't damage hair", ""don't make performers get tired easily", and they "lasts their sharpness for a long time", these are hallmarks of bona fide scissors.

There are few scissors in Japan which are taken account of "hair stylists" and "hair per se".
Requirements for bona fide scissors include not only sharpness but also "not damaging hair", "not making performers get tired easily" and "lasting its sharpness for a ling time".

Tatsuya Kuribayashi's criteria for producing scissors are these 3 respects mentioned above and he thinks these criteria are applicable to right choice made by hair stylists who seek bona fide scissors.

Applying blades with the special shapes which "don't damage hair" 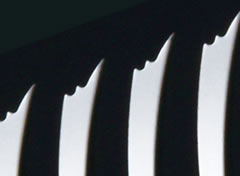 Redress by skillful hand enables to "cut hair without crushing cells of each hair".

Hairs are thin and delicate. Cells of hairs may be crushed if the thinning scissors are in bad condition. S.cosmo redresses by skillful hand and adjusts the bite and the balance of scissors in optimum condition.
Redress with micron level accuracy is necessary because the diameter of a hair is 60 to 70 microns. This is impossible by machining.

They "don't make performers get tired easily" because their design and form are based on ergonomics. 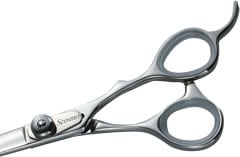 "Sharpness lasts for a long time" because it has applied the process for making Japanese swords.

Scissors of S.cosmo are rarely sent for repair..This astounding duration of sharpness is attributed to the manufacturing process which has basically applied the process for making Japanese swords and razors.
Ultimate duration is materialized by the forging technology which forges material (steel) and enhances duration of sharpness to the maximum.

He resolved to try his own potential and began his apprenticeship.

Tatsuya Kuribayashi was born in Sanjo-shi, Niigata in 1972 and graduated from local technical high school. Then he was employed by a big local machine maker as an operator of machine tools. During about 4 years of life in the company he had not complained about his life but felt something was insufficient because he had been interested in crafting since he was a boy.
His father had been employed by Yamamura MFG Co.,Ltd. which had sold material and parts of scissors.
The president Mr. Noboru Yamamura had thought that "he would manufacture scissors per se by himself" and sought talented persons. Kuribayashi also had heard that story. Kuribayashi had been obsessed with the idea for 6 months and finally resolved to begin his apprenticeship despite of strong opposition from kinsmen and friends because there had been no craftsman in a field of scissors making in Sanjo-shi and he would try his own potential.

"You are not suited to be a craftsman" he heard every day. "I will triumph over you someday" he swore to himself.

In April, next month, he began to serve his apprenticeship at Mr. Fukutaro Takahashi who was introduced to him by the president Mr. Yamamura and was the leading figure in the scissors industry.
Kuribayashi began his apprenticeship at a factory in Agano-shi, Niigata and he worked with 16 employees as a workforce during daytime every day.
He had had time to spend in building up his skills during nighttime after work and had to work unpaid because of the apprenticeship.
Although Kuribayashi had concentrated single mindedly on his training, he had had a hard time devoting himself in work unlike a machine tools operator.

The president of the apprenticeship and fellow workers said to him, "you are not suited to be a craftsman". "I will triumph over you someday", Kuribayashi swore to himself and concentrated single mindedly on his training.

He concentrated single mindedly on his research and training until late at night every day.

Then he was employed by his benefactor, Mr. Noboru Yamamura of Yamamura MFG Co.,Ltd. and he and Mr. Yamamura began to fight shoulder to shoulder to make scissors. Mr. Yamamura did not sell scissors made by Kuribayashi and denounced him and pointed out problems unreservedly. They asked hair stylists to try their scissors made by Kuribayashi and gained feedback and then modified them and gained feedback again.
They repeated this cycle again and again then solved problems one by one.
He had continued to research and to train himself till late at night for a year. Mr. Yamamura had succeeded to research and theory of steel, advocated by Mr. Shigeo Iwasaki, the leading figure in a field of metallurgy and forging technology (theory for sharpening blades of swords) in Japan, and Kuribayashi had been given instructions by Mr. Yamamura and devoted himself in work to be a craftsman day by day.

The president Mr. Yamamura said "If we wanted to make money soon, we should sell hair cutting scissors when their quality was so so. But we should not let Kuribayashi compromise because he was so young."

He debuted as a craftsman at age 25.

Kuribayashi established his own company, "Cosmo-smith Co., Ltd." in October.1997, August at age 25.

Scissors made by Kuribatashi, especially thinning scissors have been highly evaluated and got publicity in the media many times. Due to his spirit of inqriry, passion and incisive sense, he was regarded as a craftsman in a field of making scissors for the best professionals at age 27.

Kuribayashi had built up his skills rapidly in a short period and his efforts culminated in success.
He showed scissors of his own making to Mr. Fukutaro Takahashi who is his benefactor, and also his mentor.

He did not commend him and said "remember your ambition".
Kuribayashi received the message as "never be satisfied with the status quo, never neglect training".

Ambition and passion in making scissors

Currently scissors are manufactured in South Korea and China, but their quality is far less than the Japanese products.
Nevertheless there are still a lot of problematic Japanese products.
Kuribayashi hopes that "a lot of hair stylists realize the truth".

Furthermore not only the Japanese beauty industry but also those of Asia, Europe and America have applauded his products.
Kuribayashi's new ambition has just begun.